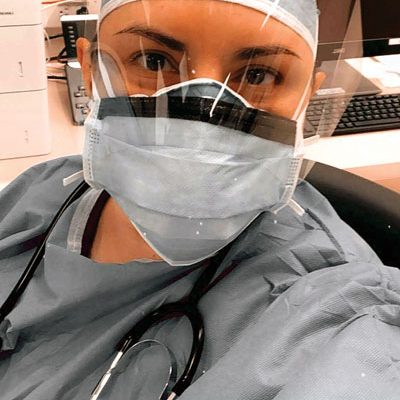 A traveling nurse who resides in Otto is in the frontline battle against COVID-19 in New York, which is the epicenter of the outbreak.

Amber Espinoza is a Wyoming native with a calling for nursing. She is a graduate of Casper College, earning an associates degree in pharmacy technology. She also completed her first year of nursing school and received her LPN license.

In 2011, Espinoza became a traveling nurse. Fast-forward to 2012 and Espinoza met her boyfriend Rodney Tolman, who is also a nurse, when she went to work on assignment for the Wyoming Retirement Center in Basin. In 2013, she moved to the Big Horn Basin area and currently resides in Otto.

Tolman and Espinoza have six children and seven grandchildren.

Espinoza said with Rodney’s encouragement, she enrolled and was accepted back into nursing school in 2015 as an Advanced Placement LPN student. She graduated with honors from Northwest College in 2016 as an RN.

She continued on being a travel nurse all the while picking up per diem hours as a float nurse at Cody Regional Health Cathcart Building and the Cody Detention Center.

Other than the current assignment, Espinoza said the farthest away she has been as a travel nurse was Hawaii.

Prior to New York, Espinoza’s previous assignment was on the Neuro Surgical Trauma floor at St. Vincent’s Healthcare in Billings, Mont. She said most of her assignments are contracted out in 13-week increments; however, she extended her contract at St. Vincent’s for one year.

Espinoza has received multiple Daisy Award Nominations for Extraordinary Nurses. “I am very passionate about my career,” she said. “It does not feel like a job to me. I am dedicated to my patients. This is my calling.”

She was presented with an opportunity to serve in New York at the end of March. “I contemplated this decision for quite some time,” she said. “The interview questions had me wondering if I was strong enough to go through with this assignment. The company was very forward with what I may endure while here. I would also have to quarantine for two weeks post assignment.”

Once Espinoza made the decision to go, she was given 48 hours to deploy and be onsite. She said she used those hours to spend valuable quality time with her family.

Per company policy, Espinoza is not allowed to discuss which hospital she is working with. She said she is deployed with thousands of nurses from all over the United States. She is there with a disaster relief-staffing agency.

Espinoza is housed in a hotel on Times Square that is reserved for medical staff only. No one from the public is allowed inside. She said they are transferred to and from their assignments on charter buses.

Her original tour was for 21 days in a row with 84-hour weeks. She was to work 12-hour shifts, but that has since turned in 16-hour days. She gets two days off before another 21 days with the same rotation ongoing.

She said the company has since revamped this schedule. “If we prove ourselves, and we can make it through 21 days, we can extend our contracts working only 60-hour weeks with two days off,” she said. Espinoza extended her contract last week.

“Our common goal is to assist our country and the New York healthcare workers in our fight against COVID-19, where the epicenter of this battle is taking place,” she said.

She said the New York healthcare system was being inundated with patients and in desperate need of help. She added, “Their nurses were drowning in patient care. There was not enough staff. They were running out of supplies.”

“Nothing could have prepared us for what we were about to walk into,” she said. “I am not trying to add to any hysteria. I have been in the medical field for 21 years. This was unlike anything I have ever experienced as a nurse.”

Espinoza said as her team walked off the elevator onto the floor for their first assignment in NYC, the nurses praised them with joy and gratitude.

“Their eyes spoke volumes through all their PPE. They had been returning to this same hospital for days on end with no relief in sight,” she said.

In NYC, there are over 30 hospitals. Espinoza said her company deployed enough staff to fill each of these hospitals. They came in waves of 400 to 600 nurses at a time every few days until the need was sufficient. Espinoza said they also dispersed out nurse practitioners, physician assistants, respiratory therapists and pharmacy technicians.

On the first day of her assignment, Espinoza said their nurse-to-patient ratio was approximately 12-15 to 1. “This has gradually decreased in ratio as more nurses are deployed out, patients have expired or been discharged home,” she said.

Espinoza said their unit does not have CNAs or phlebotomists. They are short on respiratory therapists and pharmacists. She said the nurse is doing total care on each patient. This includes lab draws, baths, bed changes, medications and respiratory management. Espinoza said the hospital has a limited number of patient care techs and sometimes they are lucky enough to have one on their floor.

Espinoza has seen patients in age ranges from 9 years old to 99 years old that have been admitted with the virus. She said the unit she is on has 55 beds. “This is just one unit, in one of many hospitals here. We have approximately 20 floors, an emergency department and an emergency overflow. Multiply this number by over 30 hospitals. This is one of the smaller hospitals in NYC.”

To give perspective, Espinoza said that is about half of the total beds at Cody Regional Health including their long-term care center.

Espinoza said when they arrived, the hospital did not have enough beds. They took a closed-down floor that was in the middle of reconstruction and assembled their own unit. “This is a disorganized disaster. We are a full COVID unit and we are at capacity,” she said.

The hospital is seeing a shortage of supplies which include IV pumps, BiPap machines or ventilators, oxygen tubing supplies,  incontinence briefs, linens, pillows, blood pressure machines and blood glucose machines. She said they have makeshift medication storage boxes with patient labels on them.

“Our morgue space is at full capacity, so we are using freezer trucks to store the bodies. This is demoralizing to our profession,” she said.

Their PPE is scarce as well. “We get one surgical gown for the whole shift,” she said. “We use polyethylene gowns over our surgical gowns between each patient. We are double gloved and masked. We preserve our precious N95 masks by covering them with a cloth mask.”

Espinoza also wears covering for her shoes and hair. She wears eye protection or shields. She said they ask patients to wear a mask when they are providing care for them.

When she returns to the hotel, Espinoza is met with a decontamination station in her room and showers immediately. “We are not allowed anywhere in the hotel in dirty scrubs,” she said.

Espinoza said they recently were issued an iPad so families can see their loved ones via FaceTime. Due to the lack of curtains or private rooms, the patients do not get the privacy of speaking alone. “Majority of the time, our patients only have us when they pass away,” she said.

She recalled one death where the staff gathered around the patient’s bed, held his hands, stroked his head, and sang “Amazing Grace” and “Swing Low Sweet Chariot” before ending in a prayer.

On the other end of the spectrum, she said the hospital had been playing “Fight Song, “Three Little Birds” or any uplifting song over the intercom when a patient is successfully extubated from their ventilator.

At the end of the day, Espinoza said there is still so much to be grateful for. “Every day our bus pulls in, we are cheered on with flashing lights, horns and celebration from the NYPD, NYFD and residents of NYC. We are thanked and clapped for when we walk down the street on any other given day.”

Espinoza said this experience has changed her. It has changed the way she views healthcare, humanity, family and faith. She said their team is amazing. “We were all once strangers, with different backgrounds from different states. Now we are like family. We have spent every waking hour together. We have laughed, cried, celebrated and prayed together. We have depleted supplies, embraced the chaos and assembled a new unit in the hospital together. We have pulled from each other’s strengths and built some lifetime friendships.”

She said it has been the best decision of her life.

Espinoza gave praise to Wyoming and said they are blessed with some of the best hospitals and healthcare workers. She said the rates we are seeing in Wyoming have no comparison to NYC. She explained we are seeing low numbers in our state because of already having a low population. “Which in turn means our hospitals have a low capacity for bed space,” she said.

She said she could not imagine what would happen to Wyoming hospitals if they were overrun by COVID-19 patients. She urges people to continue to follow the CDC guidelines such as washing hands, wearing a mask and maintaining 6-foot distance.