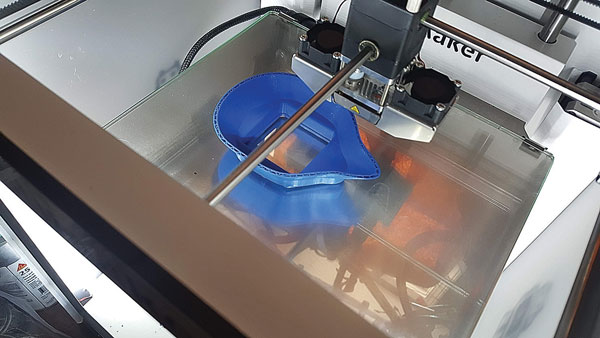 Big Horn County School District No. 4 has seen a lot of changes in the past month. With the closure of the schools due to the COVID-19 pandemic, the district found itself transitioning from a brick and mortar classroom to online learning.

Not only did they transition to online learning, but also the district has become creative with the use of school equipment such as the 3D printers. These printers were enlisted in the effort to make masks for the first responders within the county.

Superintendent Dave Kerby was approached by Basin Police Chief Chris Kampbell to see if it would be possible for the districts 3D printers to print masks.

Kerby contacted Jereme Carne, CAD teacher at RMHS, who agreed to take on the project. Carne said he had been getting article links sent to him a few times. Public Health Response Coordinator Chad Lindsay reached out to Carne with an actual file he could use. This file came from Billings, where oral surgeons and doctors got together and traded the CAD model for the masks. Lindsay recruited a few teachers throughout the Big Horn Basin to print masks.

These masks are made from PLA plastic. The premise with the mask is there is an opening in the very front. Someone cuts a 2-½ inch by 2-½ inch square filter material. There is a clip that secures the material to the mask. The material can be replaced and there are ways to sanitize the mask itself so they can be reused.

Even though the CAD file was already made, Carne did a little work in the Solid Works program. The program that is used for slicing the project for the 3D printers was Cura.

“When you have a CAD file and you try to send it to a 3D printer, what you have to do is you have to send it to what is called a slicer. It basically lets you orient the part how it actually is going to sit on the printer and then it basically creates all these little cross-sectional slices and it kind of builds it up one layer at a time,” he said.

Carne has four printers going at the same time to help speed up the process. He also had to take the printers home. Carne said they need to be checked on periodically. When he has to start a new print, he has to do it manually.

“I figured it would be easiest and more efficient to bring them all home,” he said.

The total number of masks produced is 112. He gave them to Kampbell, who then gave them to the first responders in Big Horn County.

“We are very excited to be able to participate with the county health,” said Kerby.