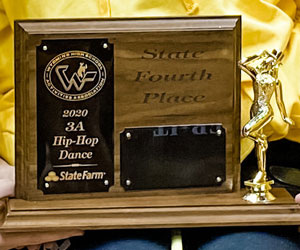 Five students from the Burlington Schools traveled to Casper to compete in the 2A-4A State Spirit Competition.

The competition was held on March 11. Burlington is a 1A school so the Huskies competed against much larger schools. The Burlington team placed fourth in the 2A Game Day event and fourth in the 3A Hip Hop. This is the first year they have competed in Hip Hop.

The team is made up of Alexandra Olson, Sydney Olson, Grace Olson, Abby Olson and Brinly Casey. Grace underwent major brain surgery in October and had other major emergency surgeries in November. She spent most of the fall season in and out of hospitals in Utah.

Assistant cheer coach Marianne Olson said, “We are very proud of our girls and for how hard they worked all season to prepare for both events.”