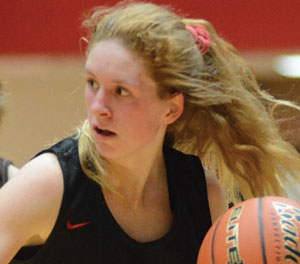 The Riverside Lady Rebels saved the best for the last. The young team has been getting better and stronger as the season progressed and peaked at just the right time – the Class 2A West Regional in Riverton last weekend.

Not only did the Lady Rebels go 3-1 (their best four-game stretch in years) at the tournament to seal a bid to the state tournament in Casper, they beat long-time rival Greybull for the first time in almost a decade, sending the Buffs home.

Coach Sam Buck’s Lady Rebels started regional play with a “huge 41-36 win” over Wind River Thursday. The Rebels went in ready and primed to play a team they’d come close to, but hadn’t beaten this year.

Buck said  “team defense as a whole” keyed the victory. That, plus an “awesome” game from freshman Caroline Schlattmann and “one of her top offensive games — from junior Monique Velasquez. Everybody chipped in,” Buck said, adding that key throws by Breana Riley down the stretch were crucial as well.

Defense was so important, Buck said, “because our outside shots were not falling. We had to dig in our heels and get some stops. And the defense stepped up and stopped Wind River’s two biggest threats.

Buck has been saying all year that his team had to learn “to finish strong, not let opponents put their backs against the wall,” and they responded big time Thursday.

Schlattmann was the only Rebel in double digits with 16 points, including 6 of 9 from the charity stripe, and made it a double double with 10 boards.

Pumped up with the first-round victory, the Rebels were primed and ready to take on Rocky Mountain Friday, but got a “horrible” start. For the first time in a long time, the Rebels were held scoreless in the first quarter — the score was  8-0 — and had to play catch-up after that.

By halftime it was 16-10 and the game was within reach.

Teagan Townsend, Rocky’s outstanding senior scorer and leader, came out and popped in three 3-pointers and “that was really the ballgame,” Buck said. “We made a couple of runs, but with Victory (Buck) and Caroline (Schlattmann) in foul trouble….” the Rebels couldn‘t pull it off and lost, 43-30.

A disappointing loss, but he said he “loved the attitude” to take on their old rival and nemesis, Greybull in an all-or-nothing, loser-out, winner-go-to-state ballgame.

“They put their disappointment at the loss to Rocky behind them and Saturday morning woke up bouncing off the walls.”

The game was close with Riverside up 7-5 at the end of one quarter, and 19-15 at halftime.

Greybull’s defense was solid, as always, but the Rebels stepped their defense up also, got some Buffs in foul trouble early, and in the second half Victory Buck decided to take things in her hands.

Coach Buck said he had been drilling it into Victory all season that she “had to be more aggressive, drive the ball, get to the line, score some easy points,” and she heeded the call.

The freshman ended the game with 25 points (including three 3s, and was an amazing 14 of 16 from the free throw line).

Buck said, watching her play, “It was unbelievable; I wondered where that (drive, aggressiveness) had been all season.”

Buck said the freshman‘s teammates were looking for her, getting the ball in her hands and, as the last quarter ticked off, and with the Buffs staging a comeback the free throws were the difference.

The 51-44 was double sweet because it assured Riverside of a seed in the state tournament.

Buck’s 25 points were game-high; she also had five rebounds and two assists. Schlattmann had another double-double with 10 points and 10 rebounds.

Buck said Victory had shot just 30 free throws during the regular season; she shot 28 during the tournament.

Riverside wasn’t content to sit back and settle for a fourth seed in Casper. They turned around Saturday and beat Kemmerer  42-37 to finish third.

“We wanted third,” Buck said. “We didn’t want to face Pine Bluffs right off the bat at State. We knew that Kemmerer was big and tall, and we would have to outwork them.”

And the Rebels delivered the hard-fought 42-37 victory to “punch their ticket” to state.

Rebounds, assists and steals were scattered all around with seven players getting steals, four assists, and seven coming down with rebounds. It was a team victory.

Buck said that Valeria Deniz suffered a head injury in the Rocky Mountain game Friday and was out of action for the remainder of the tournament. “Our bench was depleted,” he said, but the team pulled together.

Riverside will take on Moorcroft Thursday in the first round of the 2A tournament. The teams share a bracket with Wyoming Indian and Southeast.

Buck said, “Moorcroft has won a lot of ball games, but I like our chances. This is Moorcroft’s first trip to State in years; it’s our first trip in years. I think it will come down to which team settles in and gets more comfortable.”