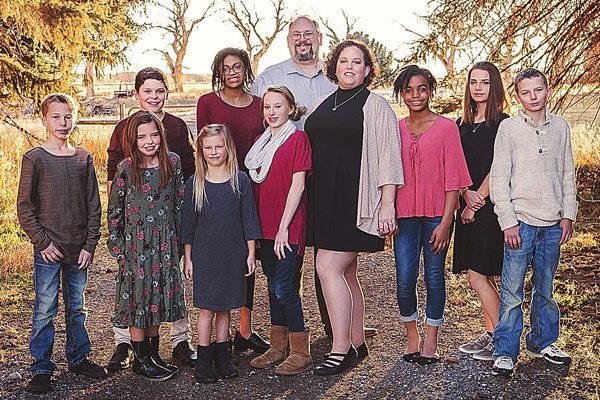 In the early morning of Dec. 1, an attic fire was detected in the home of Albert and Melissa Long on West E Street in Basin. Despite the home being declared uninhabitable the Longs feel blessed.

The building was home to the First Baptist Church for over 110 years.

Daughter Eloise was in the living room, which was once the sanctuary, when she smelled smoke. She looked up and saw flames in the ceiling. She woke up her mother, Melissa, immediately.

Long said when she came to the living room and looked up her mind was jumbled with questions. Am I really seeing what I’m seeing? Will the fire extinguisher reach that high? Will the extinguisher make a difference?

When she started thinking clearly, she ran to get all the kids, geckos, hedgehog and dogs out. Then she called 911 and her friend Teri Getzfried. The cats in the home were found safe and rounded up the next couple of days after the fire. The cats and dogs are currently in foster homes.

The kids that were home climbed into the family van for shelter until they were taken to Getzfried’s home.

The Basin Volunteer Fire Department fought the fire through a vent on the side of the building. Long said it took about two hours.

The state’s fire and electrical inspectors said the cause of the fire was an electrical one in the attic. They believe it may have been smoldering for weeks.

The home was deemed uninhabitable until the entire place could be rewired. They also told the family that the contents were not salvageable because of the carbon monoxide that would have seeped or penetrated the items.  This included food items, clothes, bedding, furniture and even electronics. One inspector told Long that the electronics may work for a while but the carbon monoxide would slowly eat away the components.

The home and contents sustained water, foam, smoke and carbon monoxide damage. Because of this and no electricity the Longs moved into the Lois and Albert Long home a few blocks away. Long said her in-laws home is “cozy” with a family of nine living there.

The day of the fire, Alice Williams and Kay Mattis from the Greybull Community Outreach thrift store met the family late at night at the store. They were able to get clothing, shoes, coats and food for the entire family at no charge.

Long said that the community of Ten Sleep collected money as did the Riverside and Sheridan schools. The VA in Sheridan donated clothes, as Albert Long Jr. is a Navy veteran. The Cloud Peak Bible Church took up a collection for the family, too.

Friends of the Longs started a GoFundMe page and an Amazon wish list. Long said they have received phone calls and donations from complete strangers. “The outreach has been amazing and overwhelming at the same time,” said Long.  She added it was humbling, too.

Albert III and Melissa adopted eight children: Kayleigh, Eloise, Madalyn, Olivia, Jackson, David, Aiden, Josephine and Nicole.  Seven of them were living in the home at the time of the fire.

Long said the kids are doing ok. Some of them came from foster homes and have lost everything before. This major traumatic event has given the kids a greater appreciation for their family tradition. The tradition is to do something for others at Christmas time. Sometimes it has been big; sometimes it has been small. She feels they understand now why it is important to do for others after seeing and receiving the kindness from the community, schools, churches and strangers. Someone bringing the family toothbrushes moved Long to tears.

Albert, who was out of the area at work, came home as soon as he could. He said the hope is for the family to be able to stay in the old church. The family has friends who are electricians that have said they would do the work. Other friends have volunteered to do the manual labor needed to restore the home. Still others have pledged to give money for the cost of rewiring it. The home was unable to be insured due to the type of roof it has.

Albert and Melissa want to stay in Basin for the sake of the kids and school. They are looking for a home to rent with at least three bedrooms. Even a home with a large basement that beds could be put in would work.

At this point the Longs have all they need for their daily lives. That will change when they get into a rental home and then again if and when they are able to get back into their former home. That will take time and money. They hope to work with local contractors at that time.

Monetary donations may be made through the GoFundMe account or brought to the Basin Area Chamber.