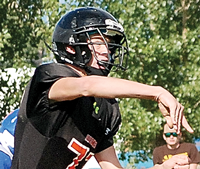 The Burlington Huskies football squad made a long road trip to Baggs to meet the Little Snake River Rattlers Saturday.

The Rattlers showed that they are a tough team to beat in the six-man conference as they shut down the Huskies 52-0.

“I thought our defense played a lot better than we did against Kaycee,” coach Trent Aagard said. “They had some big plays, but I felt we contained their big plays a little more.”

Aagard was glad to have everyone back for the Little Snake River game.

“Sebastian was back but he only practiced a couple of days, so he was limited on what we had him do,” the coach said.

Aagard said there are still some things his young team needs to work on.

“There are still things we need to work on like playing together as a team,” the coach said. “I felt offensively we could have played better and could have moved the ball on them.

“Give credit to Little Snake River. They brought a lot of pressure and we couldn’t deal with it very well.”

Aagard said he felt the team did well on containing the Rattler’s leading rusher.

“He’s really hard to tackle and I thought for the most part we did a good job containing him, but he still got out and made some big plays,” the coach said.

The Huskies now turn their attention to this week’s home game against the St. Stephens Eagles Friday at 2 p.m. The Eagles fell to the Hanna-Elk Mountain Miners 74-38 in Hanna on week one of the season and to the Meeteetse Longhorns 52-0 in week two.

“They have a fast kid in Kadon Dower,” Aagard said. “I think on defense we have to not let him get out in space. They got some big linemen and we have to contend with them. I think if we keep the Dower kid contained, we will be okay on defense.

“On offense we need to execute on a higher level and make sure we do the smaller things like blocking and making good decisions.”