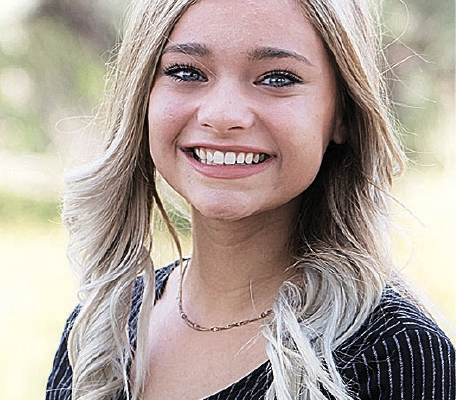 Sydney Olson, a Burlington High School senior and the daughter of Ryan and Summer Olson, will be in Laramie Aug. 3 competing in the Distinguished Young Women of Wyoming scholarship competition.

Sydney will be among six young women to be evaluated by a panel of five judges in scholastics, interview, talent, fitness and self-expression,

Sydney heard about the scholarship contest through the high school guidance counselor and also through a friend, Zariah Tolman, who had competed in 2016.

She admits to being “mostly excited; but I’m a little nervous about the talent part.”  She will be performing a piano selection “that is special to me because it was written by my Uncle Kevin (Olson).”

She has been practicing the interview competition with her dad from a list of sample questions that may or may not be included in the official program in Laramie.

The fitness competition,
the same routine for each of
the six young women, will include warm-up, balance, stability, etc.

Sydney is not sure what the self-expression category will include but is guessing it has to do with appearance, dress, poise, etc.

Looking beyond her senior year, Sydney plans on attending BYU-Provo with an eye to major in either public relations or communication.