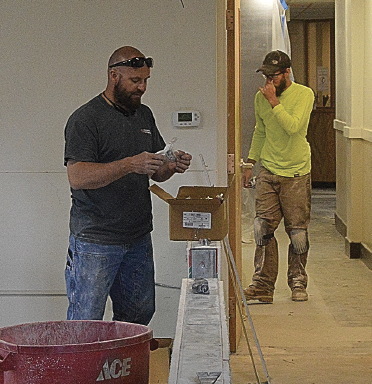 Drills and hammers have been humming away recently within the Big Horn County courthouse in Basin. These renovations have been occurring to improve courthouse security for staff, law enforcement, victims, jurors and the defendants that enter to the building on a day-to-day basis.

“Recently, the last probably eight or nine years there has been a growing trend for violence in our courtrooms,” he said. “Those violent tendencies have equated down to here in Big Horn County.”

The sheriff recalled a judge actually having to get physical with a person who was being very argumentative. They have had threats to prosecution and defense attorneys. Blackburn said they have had other safety issues. Across the state, weapons have been fired in courtrooms. In the past, fights have ensued within the courtrooms and law enforcement has had to restrain people.

“It’s signs of the times, but our courtrooms have been getting more and more on the radar,” he said.

Around four or five years ago, the state supreme court realized this was becoming an issue. It and the attorney general’s office are tasked with the safety of the courtrooms within the state. They delegated one person in conjunction with the United States Marshal’s office to go to the courtrooms across the state and survey them in regards to safety.

Blackburn said Big Horn County was found to be deficient in many areas.

“Not because it hadn’t been taken care of,” he said. “It was just really slow to catch up.”

As this was developing, Big Horn County formed a courtroom security committee. Being the sheriff, Blackburn is tasked with the security of the courtrooms. By state statute, he provides officers for the court for security and standby, which are known as bailiffs.

They met with the chief justice of the state supreme court and formed the committee. It was comprised of all the judges at that time, prosecuting attorneys, some defense attorneys, court commissioners, the circuit and district court clerks, and law enforcement.

Blackburn said this has been a joint project with the Big Horn County commissioners, who “have been driving this largely.”

The committee has been working to discover the best possible judicious matter they could expend funds. They developed a project with everyone’s input. Blackburn said it took two and a half to three years to put this together.

The end result was a plan of what was needed to improve their courtroom security. It’s not perfect, but it is better than what it was in the past.

In order to fulfill this, Blackburn said they had to do some shifting around inside the courthouse to make things accessible for everybody. They have been able to work at updating some of their facilities within the courthouse so everyone can benefit.

They needed a different space for the circuit courtroom, which is being moved to where it used to be on the southeast corner of the building. Blackburn said they won’t have to take defendants for arraignment all the way through the courtroom.

In the district court, a hallway was created for law enforcement to escort defendants to the courtroom in order to avoid contact with the public and victims.

At the new circuit courtroom, an entryway was created for the judge and jury to enter without contact with the public.

This court security enhancement project has several phases. One of the phases includes making it where defendants are not exposed. This includes not exposing the victims as well.

They are securing different areas of the courthouse where people will have to be buzzed through. A considerable amount of closed circuit video monitoring will be installed. There will be metal detectors for high profile trials and can be used for other events.

The committee has been working with various elected officials and stakeholders to meet the needs within the courthouse.

The original grant included architectural, construction, demolition and all the upgrades. Blackburn said that required a match of around $40,000.

Blackburn said this project has been done with a minimum match and a tremendous amount of in-kind match for the money that was granted to them through the legislature and supreme court.

“We have been trying to be really conscious, and the commissioners have done an outstanding job along with all the stakeholders of realizing what were our priorities, what we needed to make happen and how we can stretch these dollars as far as we possibly could,” he said.

Blackburn admits the project is not perfect, but said it’s a good example of citizens, the community and the government working together to accomplish something good. “This is all done with fiduciary responsibility and respect for the taxpayer dollars,” he added.

The sheriff commended the commissioners on their part with the project. “They have done a good job on managing this project,” he said.

Blackburn also applauded Clerk Lori Smallwood who did all the paperwork for this project and has worked hard.

It’s the citizens who benefit. “Those people that I’m shouting out are the ones that are doing it for the good of the citizens,” he said.

There have been some on the project who have been paid for their services such as the engineering services and county emergency management coordinator LaRae Dobbs. Blackburn said Dobbs has done great works on this project.

The project is moving forward. Blackburn did not have an actual date for completion, but the project is slated to be completed in the early fall of this year. They are planning on an open house.

There are other projects in the works. In the last three weeks, county employees have secured an $80,000 grant for a closed circuit monitoring system. Blackburn said there is an in-kind match of about $16,000 to go with that.

They are working on  securing a grant for the final phase of the project for a facility beside the courthouse to bring the defendants in.

For Blackburn, what is special about the project is the synergy that’s developed from people working together with the county and the state. It has had its problems, especially with money being tight. However, the project is moving forward in a generally positive manner.